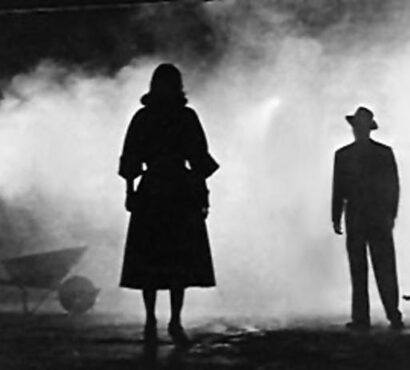 When I think of Film Noir Photography, the first thing that comes to my mind is film noir – the Hollywood crime dramas from the 1940s and the 1950s. Film Noir is a style that tells stories derived from hardboiled school of crime fiction that came about in the US during the Great depression. These were classical Hollywood films in American Cinema, entirely in black and white with a high degree of suspense, mystery and drama, with such screen legends in the prime of their careers, like Humphrey Bogart, Lauren Bacall, Edward G. Robinson and Rita Hayworth.

Since childhood, Noir has been one of my favorite genres, right up there with Science Fiction and Fantasy, with it’s low-key, black-and-white visual style, and darker tones. The term ‘film noir’ actually first appeared in Hollywood films in 1946, although it still wasn’t a recognized term to describe the genre.

So for the time being, these films were labeled ‘melodramas’ up through the 1970s. When I first thought about film noir, my first thoughts were American films, until I realized that film noir is a term that’s used to describe this particular genre.

What about Film Noir appeals to me?

Growing up, Science Fiction was my first love in film, starting with the original Star War Trilogy, and following up with other franchises, like Star Trek, The Twilight Zone, and other films produced by George Lucas, Steven Spielberg and Ridley Scott. Even some of the visuals appealed to me in these films through their special effect, cinematography and (film) photography.

When it comes to Film Noir I’ve always been a fan of mystery and suspense, particularly when it’s well directed, has good acting, and great cinematography. Now although color in motion pictures has been around for quite some time – ever since 1939 with such films like The Wizard of Oz and Gone with the Wind, I’ve always held a greater reverence and nostalgia for films such as Citizen Kane, Casablanca, and Psycho, where the lighting and shadows played tricks with my eyes and enhanced the mood and suspense in a way that wouldn’t work with color. In Classical Film Noir, what’s maybe happening in the darkness of the shadows is just as important as what’s happening in the light of day.

What are some characteristics of film noir that can be applied to photography?

Chiaroscuro is a technique used in film noir that is basically the contrast between light and dark to provide a dramatic effect on the scene. If you watch any old black and white film, you’ll notice that there’s an extra depth of beauty, suspense, and surreal nature because of this lighting. Now you can definitely have some degree of contrast in today’s films, but there’s not greater contrast in any color than between the tones of black and white. In my opinion, this is definitely an advantage when it comes to the classical noir films of the 1940s and 1950s. Chiaroscuro has a greater contrast and effects in these black and white films that just doesn’t compare to color. This has always been an artistic quality that has attracted me to film noir, and one that I can appreciate and replicate in black and white photography.

One of the keys to the effect of contrasts that I just described would be ‘low-key lighting’. This is one of those creepy, darker effects of film noir that I enjoy. This look heightens the drama and brings an air of suspense and mystery to the scene, sometimes even creating a darker mood.

The key to this technique is using a single light source, which will illuminate only the subject, or a part of the scene, while casting everything else into the shadow. When comparing the background with the foreground lighting, most films apply ‘medium lighting’, which is neither low-key, with a darker background, or high-key, where the background is brighter. But low-key lighting creates a darker and somber mood when you take away some of this natural lighting and leaving your subject with a darker background.

This is a classic shot straight from film noir, shot in black and white of course, and always involving a beautiful female, or a mysterious character, near a window blinds. The lighting source, whether that’s daylight or a street light, when it shines through on the subject in such a manner that creates harsh and vivid shadows. It usually highlights their face, with a focus on the look in their eyes as they stare through the blinds. There’s a lot of tension and suspense in this scene as the protagonist stares back through the blind, staying hidden in the shadows, perhaps feeling that they’re being watched, or even stalked.

The horizontal shadows across their face and body is just an amazing effect of film noir that you can’t go wrong with, no matter how cliche it may tend to be.

There’s always something creepy and artistic about the mysterious silhouette of the classic black and white films. These dark bipedal images are usually lurking just beyond the shadows, outlined by the light source in the background. It’s another visual imagery from film noir, usually where the protagonist runs into something mysterious: Could they be an informer? A Stalker? An Ally? Is that their outstretched hand reaching to shake yours? Or are they holding a knife? The subject is not only anonymous, carrying an air of suspense until they come fully into the light. This shot also has a bit of minimalism to it, combined with the stark contrast between the subject and lighting. There’s usually a loner detective with a shady past – he was either hurt in some way, or something happened where he’s lost all trust in society or the rest of law enforcement. He may be a little bitter with society, using heavy smoking and sometimes drinking to ease his pain. But somehow, his suspicions and negative attitude somehow makes him a better detective, capable of solving this difficult crime.

You can always bet that if there’s a detective as a protagonist, there’s guaranteed to be a femme fatale who comes on the scene to stir things up. This damsel – a term they used constantly in this genre – may be an old flame from his past, or perhaps one of the suspects, who’s usually beautiful, desirable and flirt, but dangerous and not to be easily trusted. In fact – she may even be the antagonist, to further deepen the mystery!

What are some of your thoughts on Film Noir and Photography? I’d like to hear them.