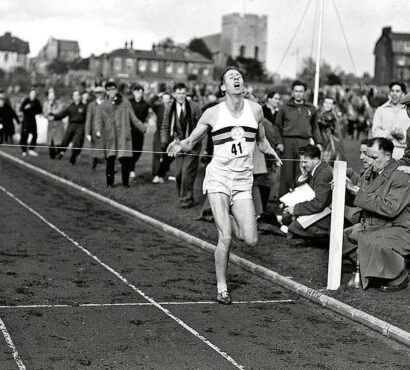 In my final blog about some of my personal favorite and impactful images in Sports history will wrap up this week with a few more images. I’ve definitely been taking my time with this subject, doing plenty of research on the internet, going through many images that I’ve found from today and all the way back through the twentieth century. I’ve looked at familiar photos that I’ve seen hundreds of times before, along with discovering many other unique moments and snapshots that I never knew about.

Of course, I’m hoping to get back out to more of my personal favorite areas of Photography, such as Street Photography, Black and White Photography, and even some Flat Lay – which I started to take an interest in a while back. I’m hoping things will start to open in the near future, but it’s hard to tell right now. In the meantime, I’m still having fun with this current topic as it’s given me another topic to dive into. I even may consider a niche in Sports Photography to match my love for sports and its history – of course, once this season has passed, in the hopes that we’ll be able to return to sporting venues like before. The four-minute mile was an elusive goal that runners have been chasing as far back as 1886, proving to be both a physical and psychological barrier. It seemed like the closer it was approached, the more daunting it seemed, until Roger Bannister became the first man to break the record at 3 minutes and 59.4 seconds at Oxford University in 1954.

The Times photographer, WIlliam Horton, had originally published a cropped shot of Bannister’s exhausted crossing of the finish line. On that day, most photographers and reporters were placed on the inside of the Oxford track but Horton managed to find a place on the inside of the track, aiming his camera at Bannister as he crossed the tape to capture the famous shot. In 1939, Lou Gehrig delivered his “Luckiest Man” speech to a full house at the original Yankee Stadium in a context that could be baseball’s equivalent to the Gettysburg Address. This famous Independence Day image portrays the ailing Gehrig – known as the “Iron Horse” – finding the strength and courage to speak to the crowd and his fellow teammates in a ceremony to pay tribute to him.

Not only is Lou Gehrig the physical and literal center of attention in this moment, but there’s also a solemness here – the players have all removed their caps, and the american flag on the outfield pole appears to be flying at half mast, giving more brevity that this isn’t just an ordinary farewell to a favorite player.

This photograph makes my list as more of an action shot, and impossible play, as just a great play on the field caught on camera. During a football game between the Dallas Cowboys and the New York Giants, receiver Odell Beckham Jr made this impossible, one-handed touchdown catch while falling backwards on a football that was overthrown. It’s been hailed as one of the greatest catches in NFL history, and Beckham used the full extension of his right hand and only three fingers to hold on and score, while staying in bounds.

And there’s also a sense of suspense here, as an onlooker who didn’t watch the game, or know the outcome of this play, would take a look and marvel at his athleticism. You also have to wonder, what happened next? Did he drop the football? Did he hang on and fall into the endzone for the touchdown? What happened next? This is definitely an image with a cliffhanger. Sept 29, 1954 – 12 time gold glove winner, Mays made one of his best defensive plays of his career in the first game of the 1954 World Series – he was running at full speed to haul in a deep fly ball to centerfield over his head to help the Giants hang on for a 5-2 win. In Baseball lore, it’s simply known as “The Catch” – one of the greatest plays in baseball history.

And it wasn’t an ordinary, routine play – it was the eighth inning of a tie ball game. With two runners on base, Cleveland hitter Vic Wertz launched a 420 feet shot to deep center field that would have been a homerun in many stadiums. But in the spacious dimensions of the Polo Grounds, a ball hit this deep might as well be swallowed up by the Black Hole. But somehow, Mays, running full speed, not only made an over-the-shoulder catch, but managed to spin around and throw the ball back to the infielders to prevent anyone from scoring. So this is not just another mere action shot, but a dramatic play with a Championship on the line. First off, I need to admit that I’m not really a hockey fan. I don’t want to say that in a bad way as if it’s a sport that I don’t like – but I just really don’t watch much beyond some of the regular highlights or scores I might see on when getting the latest updates in sports.

The above image is that of Jacques Plante, an All-Star goalie for the Montreal Canadiens during the 1950’s, donning the very first goalie mask in NHL history after being struck in the face by the puck in 1959. There’s something raw, gothic and cryptic about this image, the first time that I saw it – especially in black and white, with the lighting from underneath on the bottom left. I don’t want to say that this is a precursor to Jason Vorhee – but it’s pretty close.

What are your thoughts on some of the images that I’ve choses? Do you agree? Disagree? Perhaps feel like I could have selected different images?

MORE OF MY FAVORITE SPORTS IMAGES OF ALL TIME Sept 14 7 S. Broadway

The History of Sports Photography Part I Sept 14 7 S. Broadway